Tonight I spent an evening toying around with my vintage Apple II Plus. It brought back a lot of memories for me and I wanted to share a few photos for a bit of old-school fun. 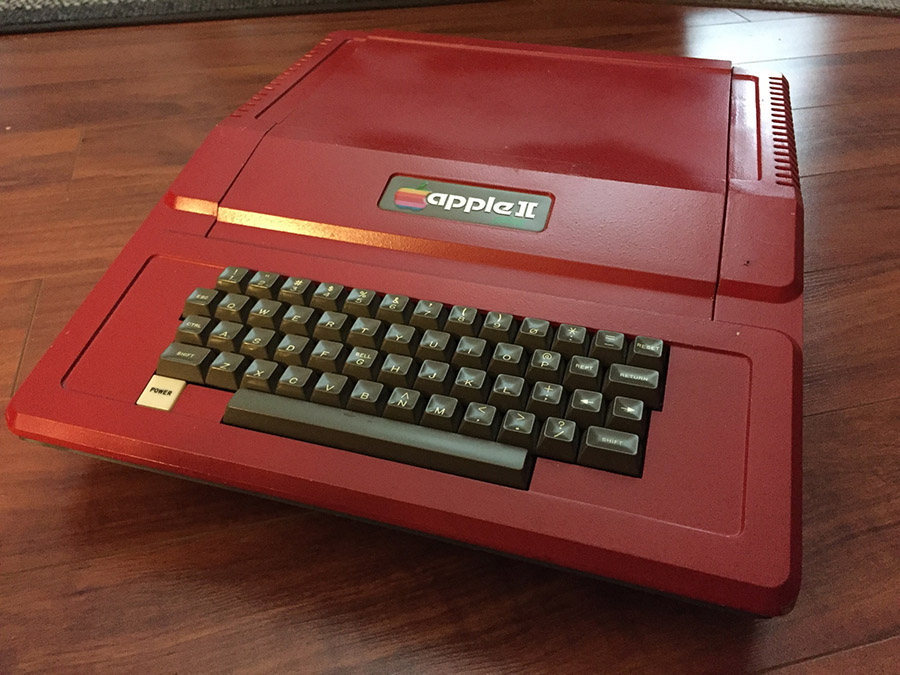 This is my Apple II Plus. It’s red! I spraypainted the chassis sometime in the late 90’s when I was in my crazy teens. I thought it was pretty cool at the time and I kinda still do. A part of me wishes I left it in original condition since the hardware itself is in such good shape but hey, the paint makes it kind of unique and it gives it a bit of a Ferrari vibe that I really dig.

The Apple II Plus was manufactured from 1979 to 1982 and, as you can imagine, was a slightly upgraded version of the Apple II. I’m not sure exactly when mine was built but I’m sure that can be identified somehow by the style of labelling, and the specific components used. I haven’t researched it to that level of detail yet but feel free to contact me if you’re an expert and can tell from the photos. 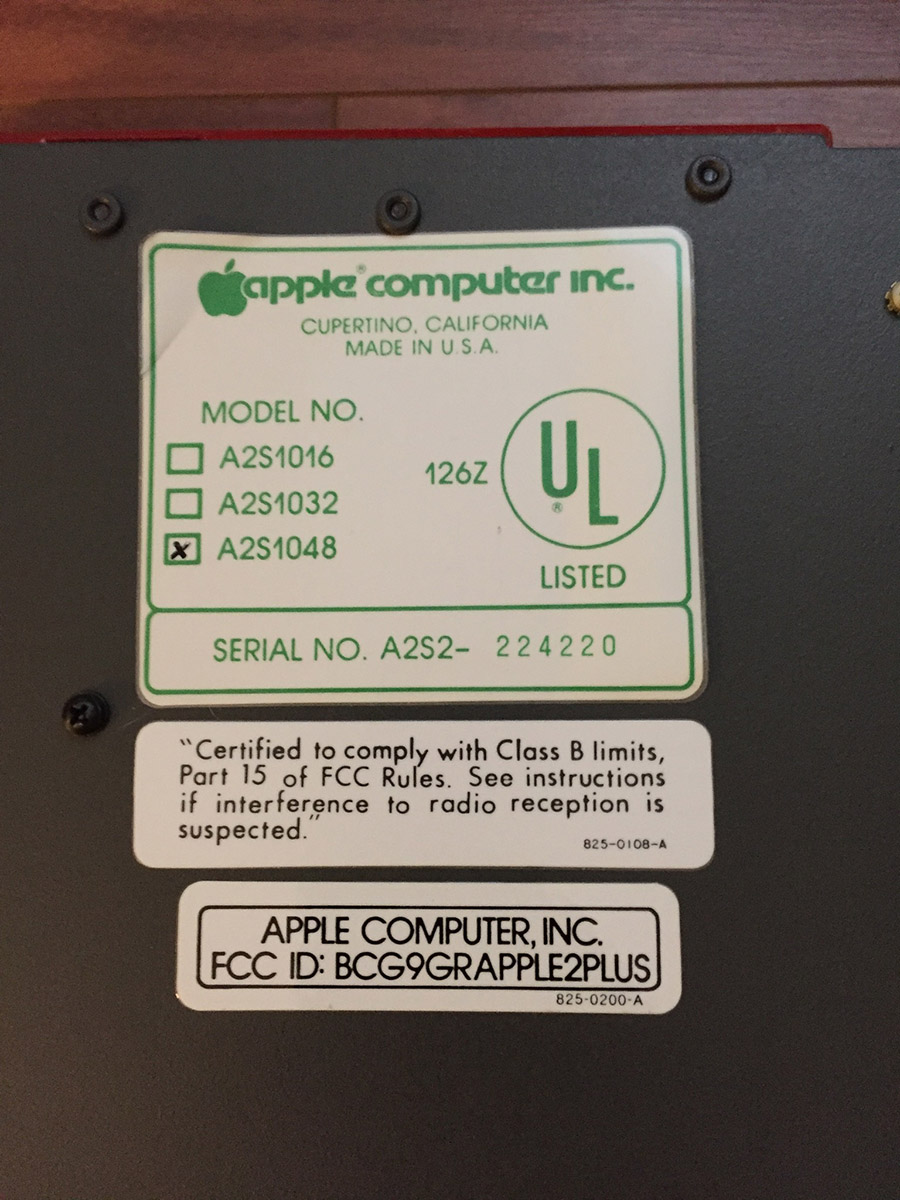 The model number is A2S1048 indicating that I’ve got the 48KB model and not the 32KB or 16KB models. This was considered a fair amount of memory at the time which is pretty insane given that 8GB is considered kind of low for a desktop these days. What’s really nuts is that computers at this time didn’t have hard drives so if you run out of memory you ain’t doing any fancy disk swapping to keep yourself going. You’re just out. Of. Memory. Period. Crazy. 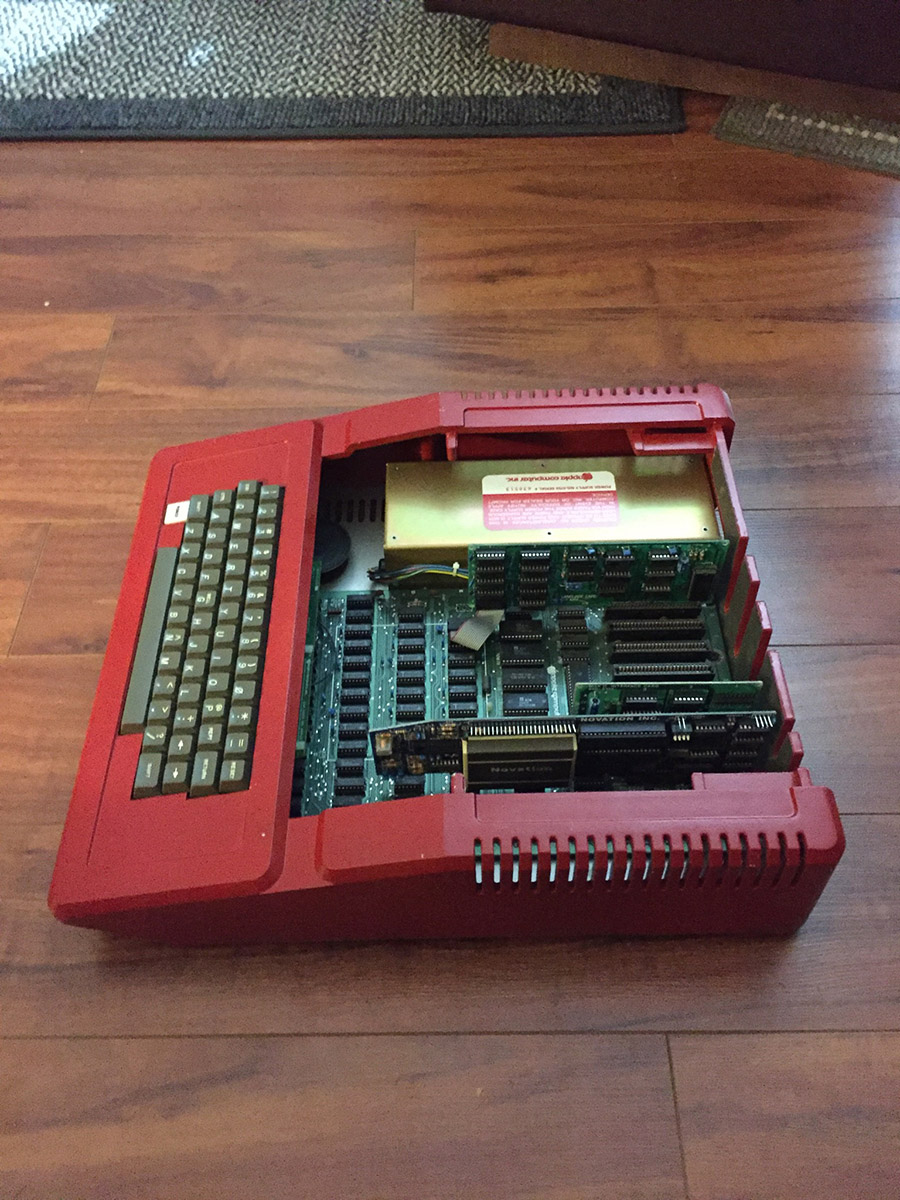 The cover comes off really easily and gives you direct access to the logic board which is super nice. I wish more modern computers would give you such unfettered access to hardware internals. Modern macs are pretty sealed up but this lets you get at everything, especially the Apple II’s 8 (!) expansion ports. I can hardly imagine filling all of these slots but I’m sure somebody out there has. My machine has 3 cards - a Language card, a disk drive card and a modem! 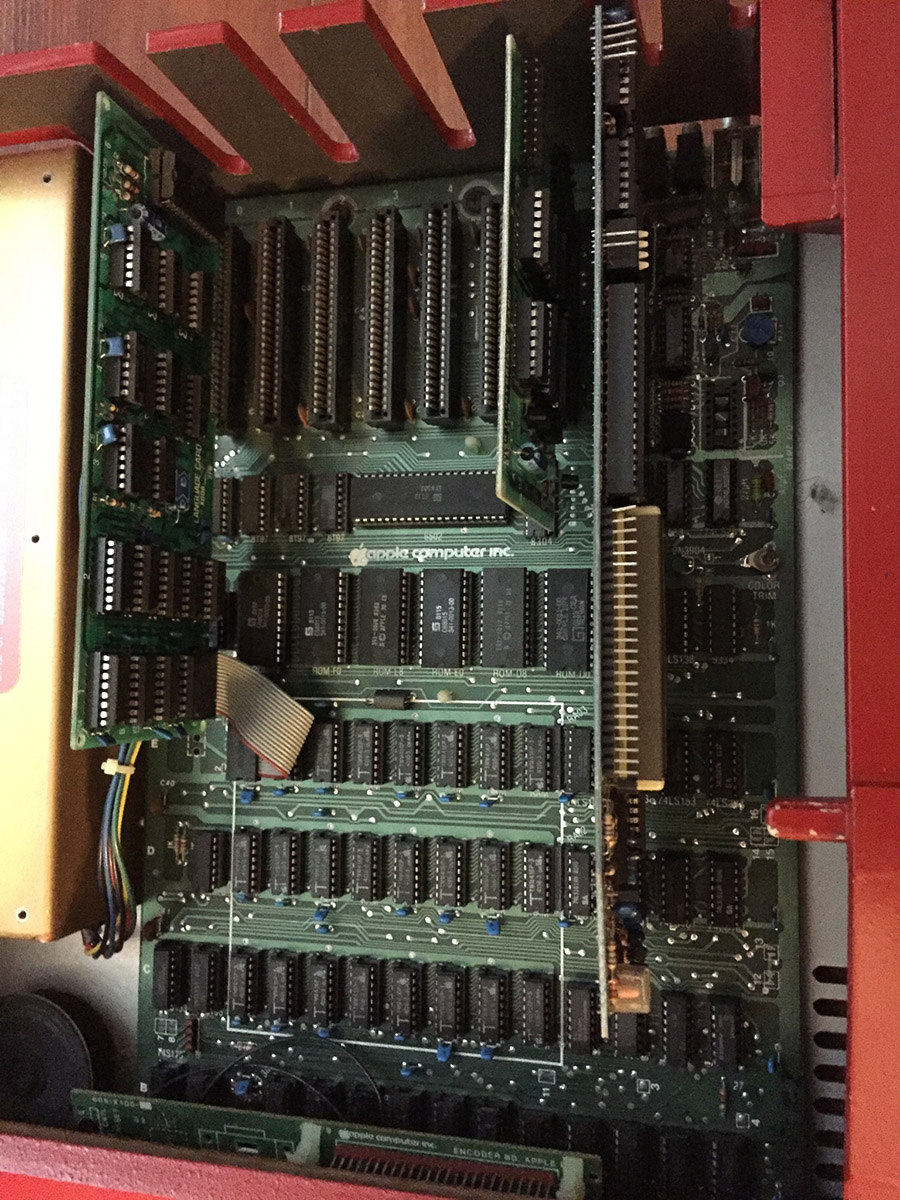 From left to right (in slots 0, 6 & 7) are the language card, the disk drive card and the modem. That white silk-screened square in the middle of the board surrounds the on-board memory. Each memory chip is 2KB on this model. 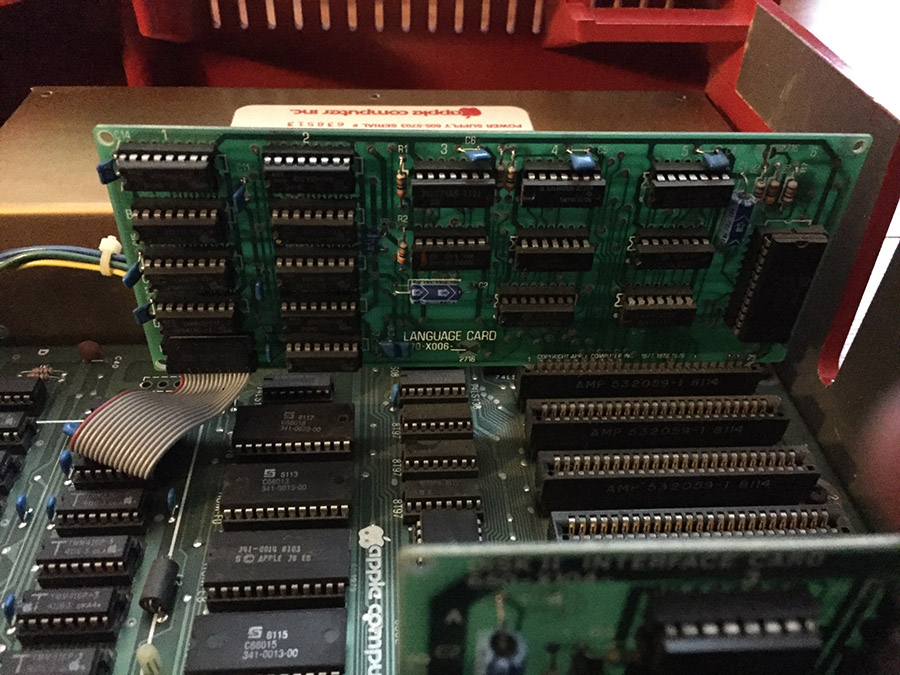 The language card has a ribbon cable on it that attaches to one of the memory chip slots on the logic board. This is like a memory expansion - the language card itself has additional memory on it that it uses to store alternative programming languages such as Integer Basic, FORTRAN and Pascal just in case the default AppleSoft isn’t enough for you. 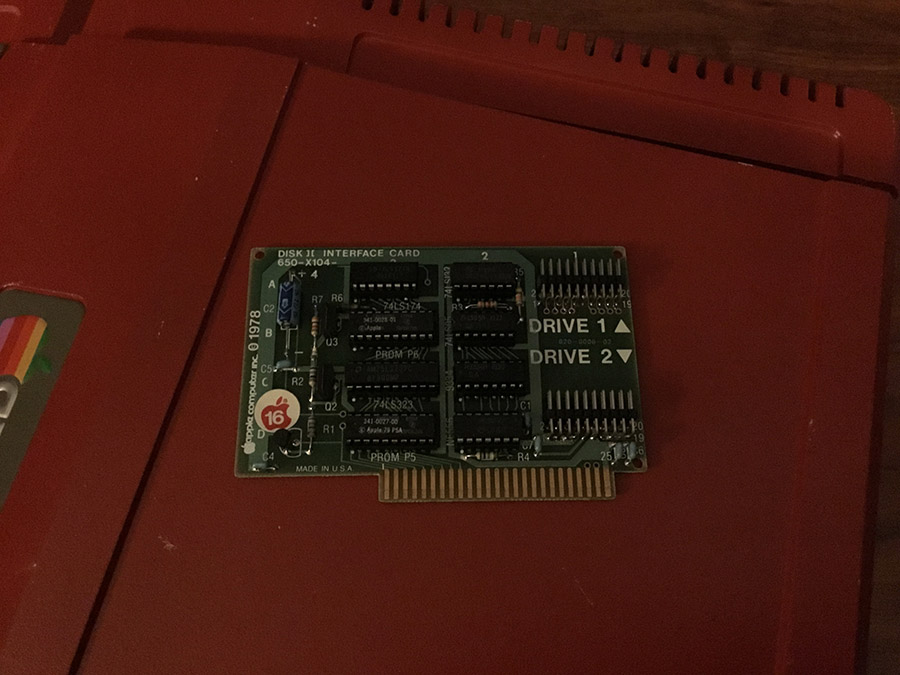 The disk drive card (officially called the Disk II Interface Card) lets you plug in two 5 and 1/4” disk II floppy disk drives. You attach the drives with ribbon cables to the DRIVE 1 and DRIVE 2 pins on the card and the cables get run though the open slots on the back the Apple II’s chassis. I’d love to know what that Apple “16” sticker means. Maybe something to do with a buffer size on the card? I’m not sure!

I have two disk drives and I remember them working - I recall running AppleSoft and I think I had AppleWorks for word processing but I don’t remember using much beyond that. I can’t find any of my old disks so although the computer should still boot as-is, I also need a monitor. So, playing around with some software will probably have to wait for another post. 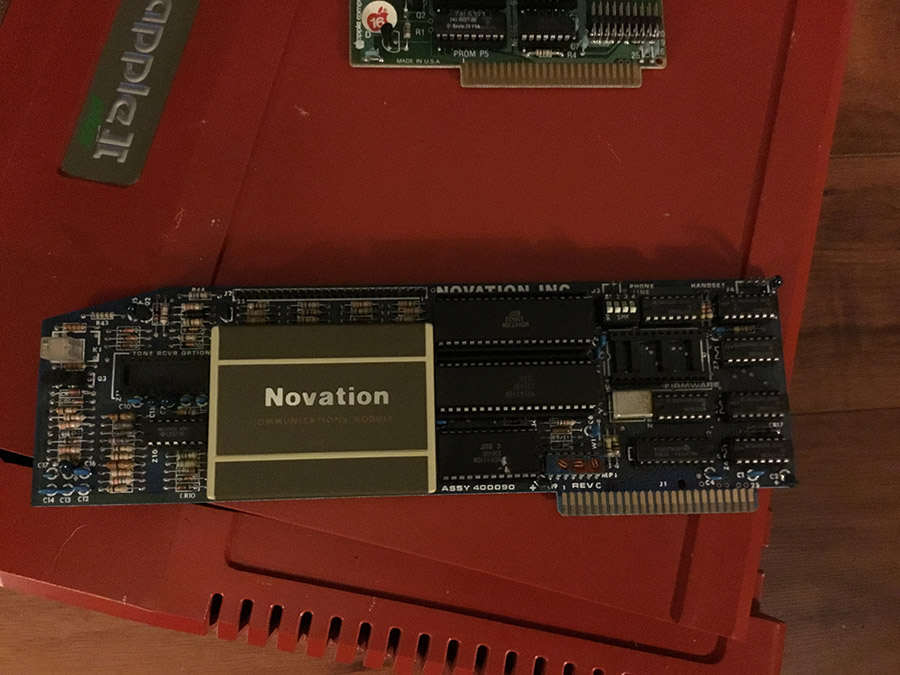 The modem - I don’t know any info on this model or even if it works! But, I have no reason to think it doesn’t so someday I may get around to trying it out. 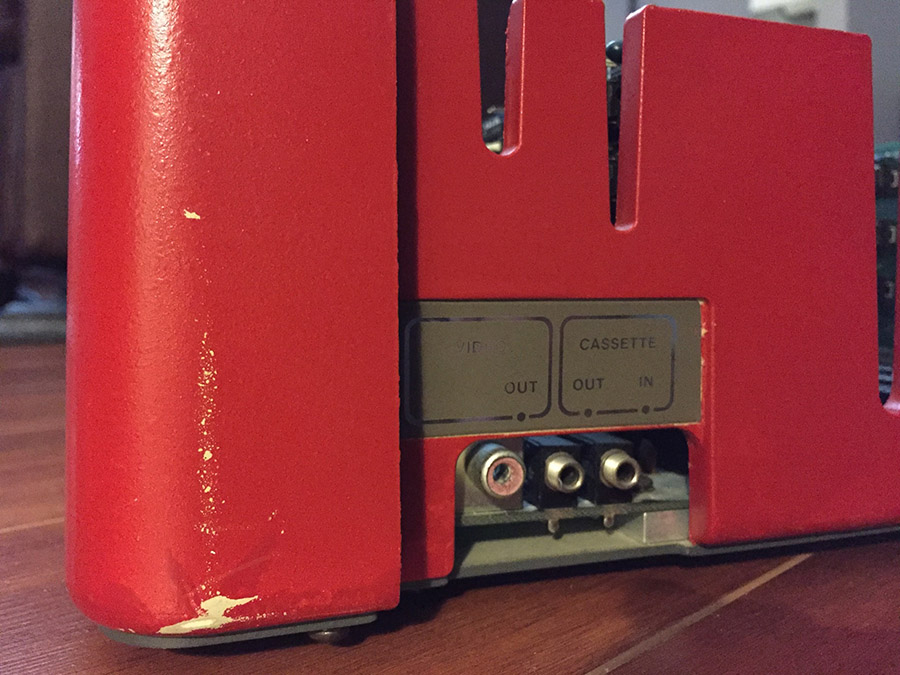 Kind of a bad photo but the left jack is to hook up a composite monitor and the two jacks on the right are for a tape “drive” which as I understand, could pretty much be any regular cassette tape deck with in and out audio jacks. I am anxious to try this part out since I’ve never tried a tape drive and it would really blow my mind to save and recall data off of something I only remember as a device that lets you listen to music. Now I have to find some tapes too! 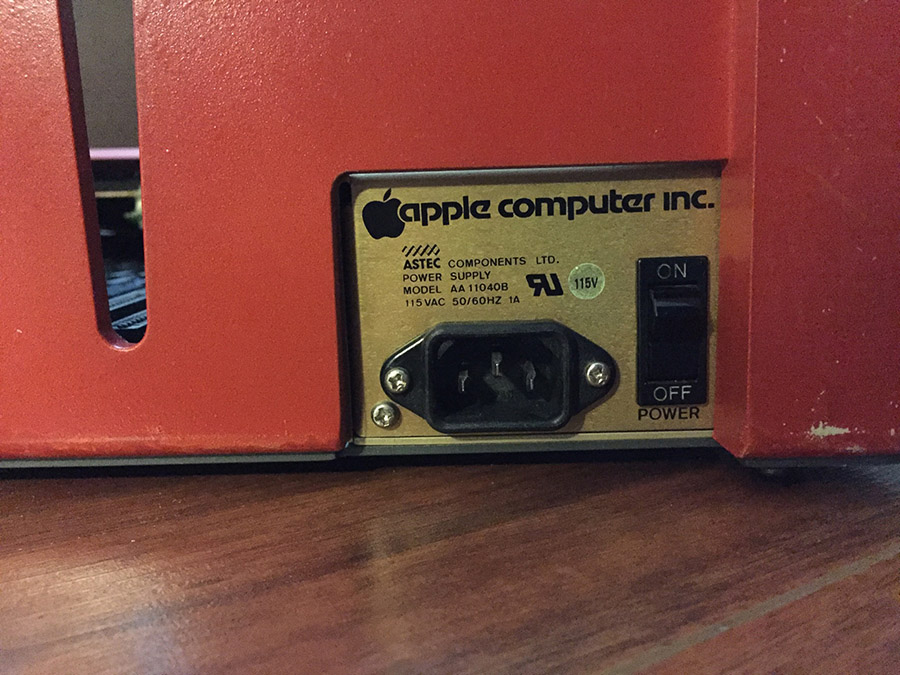 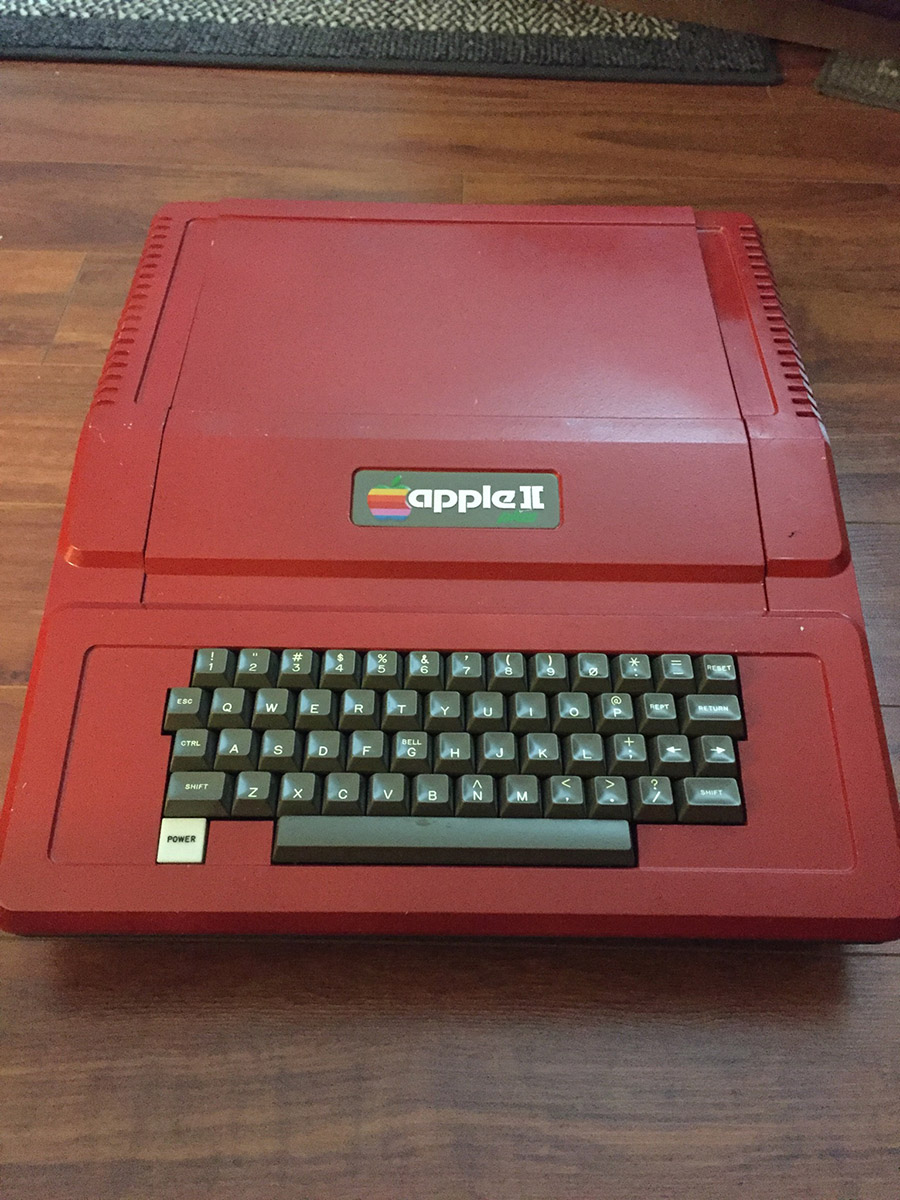 Well that’s about it for now - it’s been a good 10 years or so since I’ve had this turned on so writing this has gotten me really excited to get it up and running again. I’ll have to track down a monitor and some disks and play around! I’ve got some official Apple manuals as well that have programs in them that I can type out manually and save to floppy so I’d like to do that. Getting the modem working would be incredible but that’s a big task since networking has changed so much over the years. Finding some software would be the first step. We’ll see how adventurous I get.

Thanks for reading! Hopefully you’ve enjoyed the photos - it’s a cool vintage machine that I’ve always had a soft spot for. One of these days I’m going to turn it back on and as long as it doesn’t catch fire I’ll try to write up another post when I do. Until then my Apple II Plus will patiently sit in a safe, dust-free place.